A first test case with SHARPy¶

This notebook explains how to create a prismatic cantilever and flexible wing in SHARPy. It aims to provide a big picture about the simulations available in SHARPy describing the very fundamental concepts.

This notebook requires around two hours to be completed.

Generation of the aeroelastic model¶

This section explains how to generate the input files for SHARPy including the structure, the aerodynamics and the simulation details.

The generate cases module of SHARPy includes a number of templates for the creation of simple cases using common parameters as inputs. It also removes clutter from this notebook.

The following cell configures the plotting library to show the next graphics, it is not part of SHARPy.

In this section, we define the basic parameters to generate a model for the wing shown in the image below. We use SI units for all variables. 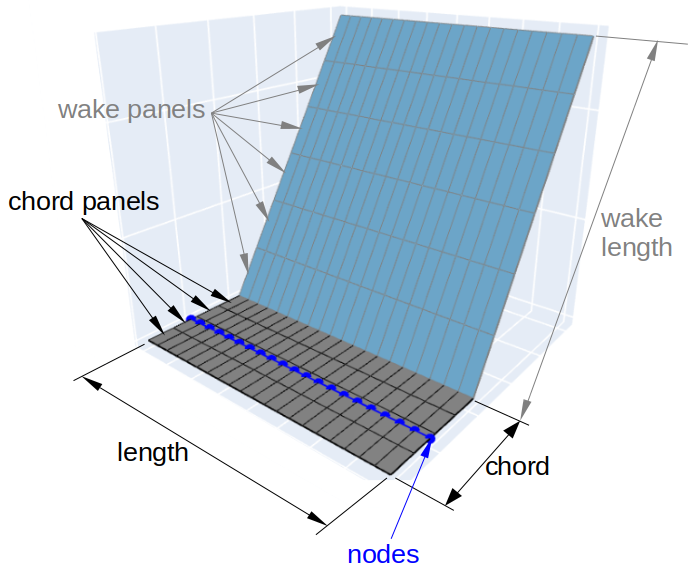 For now, we keep the size of the wake panels equal to the distance covered by the flow in one time step.

This section creates a class called AeroelasticInformation. This class is not directly used by SHARPy, it has been thought as an intermediate step between common engineering inputs and the input information that SHARPy needs.

It has many functionalities (rotate objects, assembly simple strucures together …) which can be looked up in the documentation.

The attibutes that have to be defined (not all of them are compulsory) can be displayed with the code below. They constitute the input parameters to SHARPy and their names are intuitive, however, a complete description of the input variables to SHARPy can be found in the documentation: structural inputs and aerodynamic inputs

For example, the structural properties are:

For example, the connectivities between the nodes required by the finite element solver are empty so far:

For a list of methods that allow us to modify the structure, Check the documentation.

If we now show the connectivities between nodes, the function has created them for us. Further information

We need to define the number of panels in the wake (wake_panels) and the camber line of the wing which, in this case, is flat. Further information

Now, we have all the inputs that we need for SHARPy. In this section, a first simulation with SHARPy is run. However, it will perform no computation, it will just load the data so we can plot the system we have just created.

SHARPy runs a series of solvers and postprocessors in the order indicated by the flow variable in the SHARPy dictionary.

The generate cases module also allows us to show all the avaiable solvers and all the parameters they accept as inputs. To do so, we need to run the following commands:

Let’s output as an example, the input parameters of the BeamLoader solver. This solver is in charge of loading the structural infromation

The following dictionary defines the basic inputs of SHARPy including the solvers to be run (flow variable), the case name and the route in the file system. In this case we are turning off the screen output because it is useless because we are not running any computation.

The following functions write the input files needed by SHARPy

The following line of code runs SHARPy inside the jupyter notebook. It is equivalent to run in a terminal: sharpy plot.sharpy being “plot” the case name defined above

Let’s plot the case we have created. The function below provides a quick way of generating an interactive plot but it is not suitable for large cases. Luckily SHARPy has other more complex plotting capabilities.

Only the first 6 wake panels are plotted for efficiency.